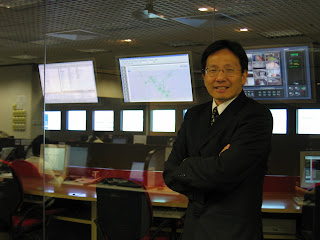 
I always have been amused by the eye-catching advertisements made by the HK Broadband, the recent one with Alexander Graham Bell (little known that he was the inventor of modern day telephone, a Canadian) clearly states that the Era of Broadband Telephony is here. TDM (Time Division Multiplexing) or the simple term Analogue Telephony has been in life for more than 80 years and while we are talking about Mega, or even Giga Bit per second transmission rate, traditional voice band communication is still the main course of telecom application. No wonder why we have such a demand and query on why we are still using that Super IT Highway to carry that the small 3K Hertz bandwidth wagon that natural human can hear or speak. It is high time we should think about the convergence of technologies, how we can make use of this broad and wide IT network to make life much easier and faster. I mean, of course, that is painful for the people that demand a slow life, but inevitably we cannot decline that the pace of Internet is growing so quickly that we are in a direction of no turning back.

The recent propaganda fight between PCCW and SmarTone has also emphasized the varieties and choices people can choose on their basic communication needs nowadays.

Telephone is not just a telephone in the modern broadband world and people are now more demanding than ever for information and instant messages. The monopoly Blackberry has been so popular 5 years ago, now it is under threat and challenge with people making use of PDA Phones Push-Mail technology to synchronize their emails, diary and contacts. It is not a surprise that nowadays, finger repetitive syndrome would be the most common sickness amongst managers.

All of the IT giants are so involved in capturing the traditional voice market with new and innovative idea and the result is encouraging but again conflicting. Voice is still the basic need, we are using different devices such as computer, laptop, mobile phones, IP phones, PDA or even a simple two-wired phone…to communicate and, in most cases, you can be reached easily by a dedicated mobile number or an email address. That’s why nowadays, people would demand their mobile number or email address to be kept as personal asset. I have been using my mobile number for over 12 years and my hotmail accounts for some 15 years; they are perhaps even more used identities than my own born and given name.

The speed of hand held devices has been boosted by the development of new electronic technology and just the right time to use up the surplus of bandwidth generated by the gigantic under-ocean fibers and the satellites. In the year 2006, over 78% of people are using broadband to access the internet ( IPSOS 2007 Web Study Report ) and are using different applications available such as VPN, VoIP, Skype, Netmeeting, MSN, QQ etc to communicate face to face with their peer partners. In HK, the choices are more eminent, in 2008, OFTA did a survey and report on WIFI AP (Access Point) and found that HK is one of the most accessible cities in the world having some 6400 public APs serving the community. Without any survey, we would know that the penetration of broadband in HK with such a dense population has made HK one of the leading cities in the world in terms of Internet usage.

With PCCW pushing the new “EYE” Phone, (as a matter of fact, the first IP Phone provider in HK is HK Broadband) we would see the battlefield is now in a multimedia world. We would expect other carriers would follow suit and in a year time, we would see that the Telephony world will no longer be the same and in order to cope with this voice only environment, 3G or even 4G mobile will be able to merge with this multimedia contact communication means. To cope with this changes, the Call Centre Industry will hence need to do a major face lift and we would expect that a lot of services would be more sophisticated with more face to face feeling, through still be a virtual touch but this would impose a lot of bandwidth, a lot of integration and a lot of more localized demand. Some of the new development is predictable like the IT equipment uplift, bandwidth etc, but what cannot be predictable is whether the service depot might need to be swift back to HK as the customer will prefer to have locals to offer service while face to face personal service would be bundled.

One thing that we can be certain is that in the new era of broadband telephony, everybody needs to be well prepared, not only the service provider but also the end-users. Don’t be left behind with all the others enjoying the speed, the convenience, and the rich and informative and personal services that you and your customers can share.

Let us have your view on what you can deliver or demand from and for your service provider and customers over this new super information highway.
Posted by HKCCA at 15:40

I read this post 2 times. It is very useful.

Let me show other source that may be good for community.